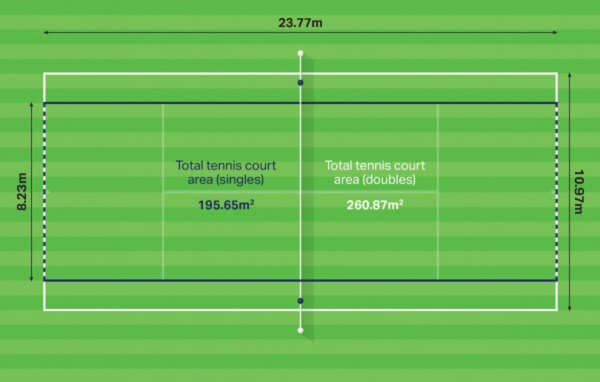 If you’ve never seen a tennis court before, you might be perplexed by all the lines. If you know the rules of the game, you’ll recognise the playing field as a rectangle with a net in the middle; however, you may be wondering what the other lines represent.

The court’s shape has changed over time and was not always a rectangle. The first official lawn tennis court, created by Walter Wingfield in 1874, took the form of an hourglass and featured a net that was between 5 and 7 feet in height.

Even though the net was only 5 feet high and some of the “boxes” were larger than they are today, the All England Club had established a rectangular court design in time for the first Wimbledon Championships in 1877. The court has altered little since 1882, when its net height was lowered to 3 feet and lines identical to those used now were painted on the court.

What do all these Lines Represent?

While playing tennis, the ball must stay within the marked areas of the court. The service box shows where a serve must land, the singles and doubles sidelines mark the outer perimeter along the sidelines, and the baseline is the furthest back a ball can land.

An true tennis court, as shown above, has a baseline at each end. Each baseline on a regulation court with singles and doubles lines is 36 feet long.

Occasionally the baselines are thicker than the other lines on the court, and sometimes they are the same thickness. The width of the lines ranges from 1 inch to 2 inches, with the exception of the 4 inch baselines.

At the exact centre of each baseline is a little line known as the centre mark, which is used by the server to ensure that they are standing on the correct side of the court before delivering the ball.

During a singles match, the outer boundaries of the court are indicated by the singles sidelines. Each one is 78 feet in length since it follows the entire length of the court.

Even if the shot was made from within the doubles court area, if it lands outside the lines it is considered “out” and the point is awarded to the opponent. The lines that separate the singles and doubles courts are commonly referred to as “tramlines.”

These are the outermost lines on each side of the court, running perpendicular to the singles sidelines; they are not identified on the above diagram. For a game of doubles, the court is delimited by the doubles sidelines. Due to the addition of two players, the court size has been increased.

The spaces between the network and the service lines are called “service boxes.” The singles sidelines outline their perimeters, and the centre service line divides them into left and right halves. As you can see from the diagram, there are a total of four service boxes—two on each side of the net.

Boxes measure 21 feet in length and 13 feet, 6 inches in width. An accurate service requires the server to stand behind the baseline and strike the ball so that it lands in the service box on the diagonally opposite side of the court from where the server is standing. It is considered a “fault” if the object is not placed in the designated area.

Can You Get “In” Trouble for Using Lines in Tennis?

A tennis ball is considered to be “in” if, on its first bounce, it contacts any portion of the service line. Of course, this might cause arguments, since players may have different perceptions of whether or not the ball touched the boundary line.

In the absence of an umpire, it might be tempting for players to declare an opponent’s shot dead even if they aren’t really sure. Accidental mistakes are prevalent, and intentional ones are not unheard of, at all levels. Just as frustrating for the players is when the umpires or line judges make a mistake.

Systems like “Hawkeye” and “Hawkeye Live” handle close calls and eliminate the possibility of disputing the verdict at the highest level, demonstrating the increasing dominance of technology.

Once you’ve been playing tennis for a time, you won’t be able to picture the court without its distinctive pattern of lines. Still, they could shift once more in the future if, say, the governing bodies elected to make the service boxes smaller in order to reduce the serve’s hegemonic status.

However, because it would be prohibitively expensive to modify every court in the world, the current setup is likely to persist for some time.