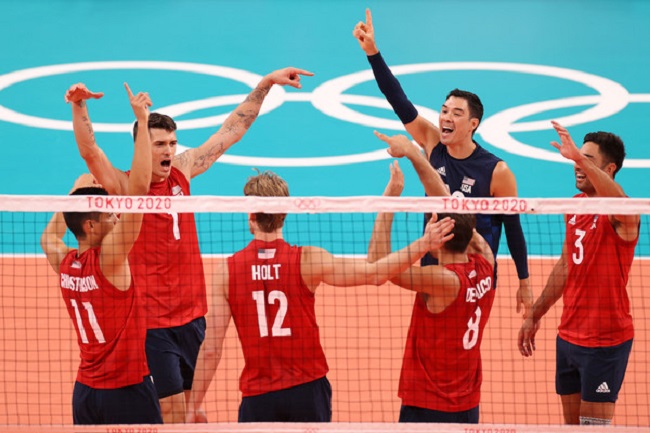 On Tuesday night, the United States men’s volleyball team defeated the Tunisian national team by a score of 3-1 behind the performance of BYU alumni Taylor Sander, who recorded 14 kills and a 60% hitting efficiency. The final scores were 25-14, 23-25, 25-14, and 25-23.

Both of Sander’s serves were aces. Torey Defalco scored 24 points for the United States with 21 kills and 2 blocks.

The duo of Gibb and Bourne are unbeaten in beach volleyball, but they will face a tough challenge in Qatar.

At Tokyo’s Shiokaze Park, Bountiful’s Jake Gibb and his new training partner Tri Bourne keep winning via knockout. They most recently won 2-0 on Tuesday against the Swiss duo of Mirco Gerson and Adrian Heidrich. Both sets ended with scores of 25-19.

Despite just having two workouts together before their first match, Gibb and Bourne have yet to drop a set in Olympic competition. Upon landing in Tokyo, Taylor Crabb tested positive for COVID-19, so Bourne replaced him as Gibb’s partner.

On Friday, however, they’ll face Cherif Younousse and Ahmed Tijan of Qatar, who are on a winning streak of their own. The two of them qualified for the Olympics in third place overall in the FIVB. Although they were the best American team coming into Tokyo, Gibb and Crabb ended up in tenth place.

On Wednesday morning, South Korea defeated Honduras 6-0 in their last Group B encounter. They lead 3-0 at halftime.

There were only two shots on goal for Honduras and twelve for Korea. For Real Salt Lake, forward Douglas Martinez logged 45 minutes of action.

With a 1-2 record overall, Honduras is eliminated from the competition.

Meg Coyne, manager and assistant coach for the national squad, will step in for Larson.

Larson was there at the Hachioji training camp. The first-ever Olympic climbing competition will get off on August 3 in Tokyo, and the squad is about to head there.